Home|Blog|Aups, the capital of the black truffle

Aups, the capital of the black truffle 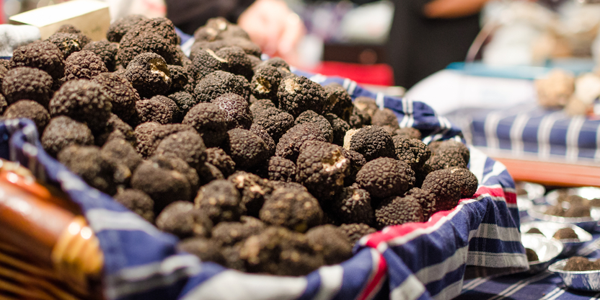 Truffle lovers are always looking forward to November, when the truffle markets traditionally start in Aups. This is not a big market, but here you will find the most beautiful truffles of Southern France. Every Thursday morning you can search for the exclusive ‘black gold’.The Provencal name for the truffle is ‘rabasse’.

The picturesque village Aups is located in the Var, along the foothills of the Provence Alps at an altitude of 500 metres. The village has about 2000 inhabitants and is characterized by narrow, medieval streets, historic washhouses and fountains. Originally Aups was built as a kind of castle, which is still visible to the city gate in the old part of the village. Aups is located in a wooded area with lots of oak trees. Not surprising that the village is known for their trufffles, as they are growing in the soil around these trees.

As we mentioned already, the truffle market in Aups is every Thursday morning from the end of November till the end of February (and sometimes even till mid March). In the morning at the square in front of the Town Hall of Aups, tables, a scale and a basket of truffles emerge from the boots of the cars. The baskets are carefully covered with a tea towel to prevent the truffles from drying out, loose weight and become worth less. And then...it’s time to wait for the customers.

Truffles are harvested in winter, beginning in November and continuing until the following March. You could try to find them in the forest yourself but be careful and cautious about the place you are looking at. You may encounter an angry owner. The best truffle finder is the pig, with an extremely sensitive nose for truffles and very keen on them (like us!). For many years now dogs have been trained to sniff out the truffles. A good truffle dog is worth his or her weight in black diamonds. Some truffles dogs have an exchange rate in some areas of Provence and are ‘rented’ to find truffles (generally for 3-4 hours). An easy way for the owner to earn income!

The price of black truffle varies between 500 to 3000 € per kg, where white truffles are more expensive than the black. It’s for that reason that the truffle is also called the black gold or the Black Diamond of the kitchen. The official truffle season lasts until March, Summer truffles are available and harvested during European summer in both Italy and France. Their flavour and aroma is much milder and subtle than the intense winter truffles, but still very nice.

The black truffle is dark-brown-black and has a rough uneven surface. Larger truffles can weigh from 100 grammes upwards, occasionallly even as much as a kilogramme, and reach seven centimetres or more in diameter. The truffle is considered as delicacy and mostly used in exclusive restaurants, like for example in Chez Bruno in Lorgues, a village 20 km from Aups. The restaurant has been awarded a Michelin star and is seen as the truffle restaurant of Southern France. But, managed to buy a beautiful truffle at the market? One common and simple use for the truffles is in scrambled egg, where a small amount is added to enrich the flavour. Bon appétit!


View villas in this areaarrow_forward

Customers value VillaSud with an average score of 8.9. This figure is based on 1144 reviews. Ratings are from 1 (poor) to 10 (excellent)